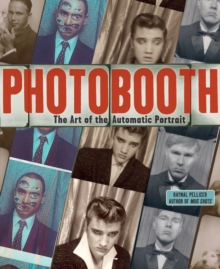 It was a small booth where anyone could get a snapshot portrait made, without a photographer, for a very small fee: 8 photos in 8 minutes for 25 cents.

The invention was an overnight success; Time magazine estimated the number of clients in the first six months around 280,000.

By the time Josepho sold his brand to a group of investors for about $1 million two years later, booths were already being exported around the world.

The concept appealed not only to the general public, but also to artists.

French photographer Willy Michel used a booth on the Boulevard des Italiens to document the celebrities of the 1920s, and decades later, Richard Avedon and Andy Warhol Orders should go to your local Sales Representatives or fax direct to GBS - UK: 01476 541 061 Export: +44 (0)1476 541 068 Image coming soon Autumn 2010 each made celebrity portraits in photo booths.

Kennedy, Anne Frank, Wim Wenders and Walker Evans. Photobooth draws a fantastic, if incomplete, inventory of artistic variations on the snapshot, bringing together works of art and self-portraits of persons, both known and unknown, from the early days to the present.