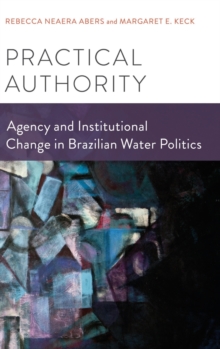 New institutions don't come into being by themselves: They have to be organized. On the basis of research from a decade-long, multi-site study of efforts to transform freshwater management in Brazil, Practical Authority asks how new institutional arrangements established by law become operational in practice.

The book explores how this happens by putting both agency and structures in motion.

It looks at what actors in complex policy environments actually do to getnew institutions off the ground. New configurations of authority in a policy area very often have to be produced relationally, on the ground, in practice. New organizations have to acquire problem-solving capabilities and recognition from others, what the authors call "practical authority." The story told here has a multiplicity of protagonists, many of whom are normally invisible in political studies, such as the state officials and university professors who struggled to move water reform forward.

The book explores the interaction between their efforts to influence the design and passage of new legislation and the hard labor of creating the new water management organizations the laws called for.

It follows three decades of law making at the national and state level and examinesthe creation of sixteen river basin committees throughout the country.

By bringing together state and society actors around territorially specific problems, these committees were expected to promote a new vision of integrated water management.

But none of the ones examined here followed the trajectorytheir organizers expected. Some adapted creatively to challenges, circumventing roadblocks encountered along the way; others never got off the ground. Rather than explain these differences on the basis of the varying conditions actors faced, the authors propose a focus on the process, and practice, of institution building.