The Times Were Strange and Stirring : Methodist Preachers and the Crisis of Emancipation Hardback

With the conclusion of the Civil War, the beginnings of Reconstruction, and the realities of emancipation, former slaves were confronted with the possibility of freedom and, with it, a new way of life.

He traces the various strategies and goals pursued by these competing visions and develops a typology of some of the ways in which emancipation was approached and understood.

Focusing on individual church leaders such as Lucius H.

Holsey, Richard Harvey Cain, and Gilbert Haven, and with the benefit of extensive research in church archives and newspapers, Hildebrand tells the dramatic and sometimes moving story of how missionaries labored to organize their denominations in the black South, and of how they were overwhelmed at times by the struggles of freedom. 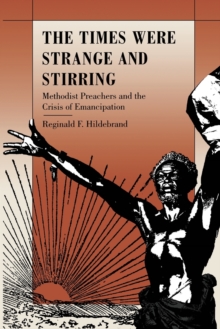 The Times Were Strange and Stirring