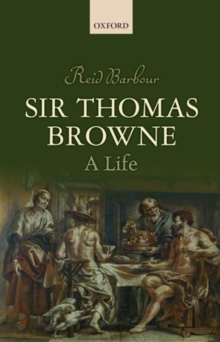 Sir Thomas Browne: A Life is the first full-scale biography of the extraordinary prose artist, physician, and polymath.

With the help of recent archival discoveries, the biography recasts each phase of Browne's life (1605-82) and situates his incomparable writings within the diverse intellectual and social contexts in which he lived, including London, Winchester, Oxford, Montpellier, Padua, Leiden, Halifax, and Norwich. The book makes the case that, as hiscontemporaries fervently believed, Browne influenced the intellectual and religious direction of seventeenth-century England in singularly rich and dynamic ways.

Special attention is paid in the biography to Browne's medical vocation but also to his place within the scientific revolution.

New information is offered regarding his childhood in London, his European travels and medical studies, the setting in which he first wrote Religio Medici, his impact on readers during the English civil wars, and the contemporary view of his medical practice. Overall, the image of Browne that emerges is far bolder and more cosmopolitan, less complacent andprovincial, than biographers have assumed ever since Samuel Johnson doubted Browne's claim that his life up to age thirty resembled a romantic fiction filled with miracles and fables.

The biography has extensive material for anyone interested in the histories of religion, education, science and medicine, seventeenth-century England, and early modern philosophy and literature.