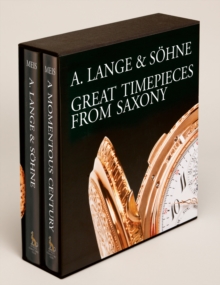 A Lange & Sohne - Great Timepieces from Saxony: Volume 1 and 2 Hardback

'Future needs heritage' - these were the words with which German philosopher Odo Marquard summarised his insight that the new world cannot exist without the legacy of the old one.

The same words aptly describe the quintessence of Reinhard Meis' work devoted to A.

With his profoundly detailed knowledge, the author builds a bridge from the grand heritage of the brand in the 19th century to its current eminence at the pinnacle of international precision watchmaking. Reinhard Meis invested eight years to thoroughly revise his standard work dedicated to the horological legend from Dresden.

In a fourth, significantly expanded edition, it is now being presented by the Munich-based Callwey publishing house as a two-volume treatise entitled 'A.

Lange & Sohne - Great Timepieces from Saxony'. Meis' book describes the complete history of the Lange watchmaking dynasty from Dresden and its timepieces, from the early beginnings in the 19th century to the present. With 916 pages and more than 2700 illustrations, mostly in colour, the scope of the book has more than doubled versus the prior edition, assuming truly encyclopaedic proportions.

The text and the images testify to the author's expertise.

In particular, the authoritatively annotated pictures are a treasure trove of information for the global community of Lange fans.

Never before have the coveted collectors' watches been anthologised so comprehensively. Entitled 'A Momentous Century - The Glashutte Watch Industry 1845-1945', the first volume constitutes a sociopolitical and historic foundation.

It provides an account of the early days of precision horology in Saxony and features biographies of famous watchmakers who worked in Dresden, among them Johann Gottfried Kohler, Johann Heinrich Seyffert, Johann Friedrich Schumann, and Johann Christian Friedrich Gutkaes, Ferdinand A.

Lange's apprentice master and mentor. In detail, the author portrays watch manufactories, watchmaking workshops and suppliers, and the German School of Watchmaking in Glashutte.

The result is a vivid picture of Saxony's watchmaking industry after the Lange manufactory was established in 1845. The second volume, entitled 'A. Lange & Sohne - The Watchmakers of Dresden', tells the story of Ferdinand A.

Lange's life from his beginnings as a watchmaker in Dresden and the incorporation of the first manufactory to his ingenuity in mechanical design and his dedication to social causes.

Tracing the brand's heyday under the auspices of Ferdinand's sons Richard and Emil, Reinhard Meis describes the subsequent expropriation of the manufactory after World War II and its re-establishment as Lange Uhren GmbH by Walter Lange, a member of the founding family's fourth generation.

A compendium of current timepieces from the LANGE 1 to the LANGE ZEITWERK forms the conclusion of the second volume and corroborates the role of A.

Lange & Sohne as one of the pacemakers of Europe's horological culture in the 21st century. 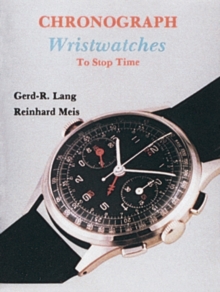