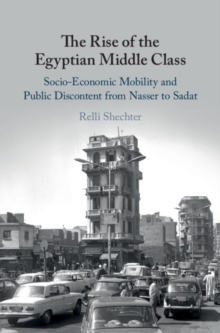 The Rise of the Egyptian Middle Class : Socio-economic Mobility and Public Discontent from Nasser to Sadat Hardback

by Relli (Ben-Gurion University of the Negev, Israel) Shechter

This book sets out to investigate this discrepancy and to offer a revisionist history of the period.

It documents the massive socio-economic mobility in Egypt by analysing relevant statistical data and ethnographic evidence, indicating the changes in the employment structure and the spread of mass consumption.

Relli Shechter further examines a wide array of cultural resources, such as Egyptian academic writing, the press, the cinema, and the literature, in which critics lamented 'what went wrong' in Egypt.

By doing so, he offers a local version of a wider Middle Eastern and international story: the global formation of middle-class societies whose members strove for respectable lives with only partial success.