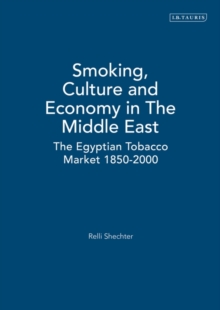 Smoking, Culture and Economy in The Middle East Hardback

In this original and thought-provoking book, Relli Shechter examines the emergence of 'modern' markets in the complex social environment of the Middle East.

Focusing on the tobacco market in Egypt, he looks at how markets interact with the society, politics and culture of the region.

The history of Egypt's smoking habits - from the water pipe to the Marlboro - closely mirrors wider socio-economic developments in the country.

Shechter begins his story by looking at the entrepreneurial Ottoman elite who produced luxury cigarettes for export worldwide.

He then looks at the role of tobacco products in forming class consciousness in the domestic market, based on the idea that "you are what you smoke".

Finally he looks at the politics of smoking in the context of contemporary economic globalisation.

The result is a fascinating book which contains a wealth of newly uncovered material. "Smoking, Culture and Economy in the Middle East" will stimulate and inform anyone interested in political economy, social change and the Middle East region.