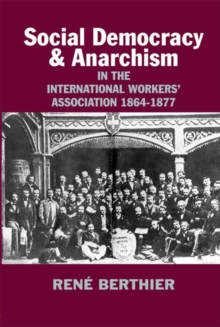 Social-Democracy and Anarchism : In the International Workers' Association, 1864-1877 Paperback / softback

This book explores the conflicts that took place in the First International.

Social and economic conditions varied greatly in Europe in the 1860s and 1870s.

The strategies adopted by the various federations and sections of the International Workers' Association, or IWA, reflected this diversity.

Although Marx and Engels have been seen as the leaders of the International, there were many who rejected their leadership. In September 1872 an extraordinary congress took place in Saint-Imier (Switzerland) which rejected the decisions taken at The Hague congress by Marx and his friends.

A year later six IWA federations met in a regular congress in Geneva and reasserted the principle that political organising should be subordinate to workplace - economic - organisation.

The great aim of the IWA was for working people to liberate themselves.

The ongoing IWA disregarded edicts of expulsion issued by the New York based General Council, at the instigation of Marx and Engels.

The latter discovered they were generals without an army, isolated and at odds with the bulk of the organised labour movement.

Rene Berthier reviews the historiography of this conflict. Much of the ongoing IWA were inspired by Bakunin. He argued for the priority of labour solidarity. But it was not an anarchist International that was created in 1872.

Anarchism was born some five years later, when Bakunin was dead.

Rather, the adoption of anarchism by the remnants of the IWA marked a breach with Bakuninism.