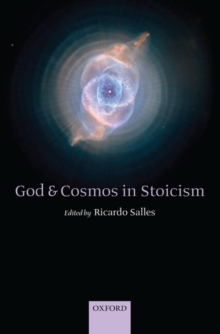 God and Cosmos in Stoicism Hardback

This is a collective study, in nine new essays, of the close connection between theology and cosmology in Stoic philosophy.

The Stoic god is best described as the single active physical principle that governs the whole cosmos.

The first part of the book covers three essential topics in Stoic theology: the active and demiurgical character of god, his corporeal nature and irreducibility to matter, and fate as the network of causes through which god acts upon thecosmos. The second part turns to Stoic cosmology, and how it relates to other cosmologies of the time.

The third part examines the ethical and religious consequences of the Stoic theories of god and cosmos.