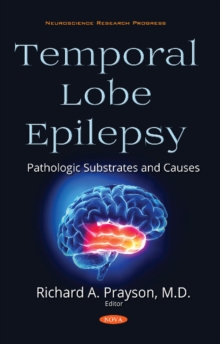 Edited by Richard A. Prayson

Pharmacoresistent or medically intractable epilepsy remains a challenge for those who are involved with the care of patients who suffer from this problem.

Many of these patients have epilepsy originating in the temporal lobe.

Surgical intervention still remains a therapeutic option for many of these individuals with variable success rates.

The focus of this text is to review some of the underlying pathologic findings encountered in patients with medically intractable epilepsy who undergo the surgical resection of the epileptogenic focus.

The research efforts in this arena have been considerable in recent years and have resulted in classification schemas of entities such as focal cortical dysplasia, hippocampal sclerosis and brain tumors that are being employed internationally.

The chapters in this text explore in some detail some of the more commonly encountered pathologic findings in tissues resected in this population of patients.

A review of current classification schemas and some of the limitations associated with such schemas are explored.

Among the topics that will specifically be examined in this text are the more commonly encountered etiologies including hippocampal sclerosis, the focal cortical dysplasias as well as other developmental anomalies, glioneuronal tumors and vascular lesions.