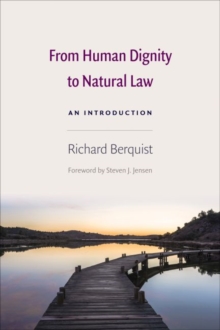 From Human Dignity to Natural Law : An Introduction Paperback / softback

From Human Dignity to Natural Law shows how the whole of the natural law, as understood in the Aristotelian Thomistic tradition, is contained implicitly in human dignity.

Human dignity means existing for one's own good (the common good as well as one's individual good), and not as a mere means to an alien good.

But what is the true human good? This question is answered with a careful analysis of Aristotle's defini tion of happiness.

The natural law can then be understood as the pre cepts that guide us in achieving happiness.

To show that human dignity is a reality in the nature of things and not a mere human invention, it is necessary to show that human be ings exist by nature for the achievement of the properly human good in which happiness is found.

This implies finality in nature. Since contem porary natural science does not recognize final causality, the book ex plains why living things, as least, must exist for a purpose and why the scientific method, as currently understood, is not able to deal with this question.

These reflections will also enable us to respond to a common criticism of natural law theory: that it attempts to derive statements of what ought to be from statements about what is.

After defining the natural law and relating it to human or positive law, Richard Berquist considers Aquinas's formulation of the first prin ciple of the natural law.

He then discusses the commandments to love God above all things and to love one's neighbor as oneself as the first precepts of the natural law.

Subsequent chapters are devoted to clar ifying and defending natural law precepts concerned with the life is sues, with sexual morality and marriage, and with fundamental natural rights.

From Human Dignity to Natural Law concludes with a discussion of alternatives to the natural law.