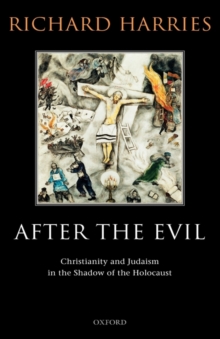 After the Evil : Christianity and Judaism in the Shadow of the Holocaust Hardback

by Richard (Bishop of Oxford) Harries

The evil of the holocaust demands a radical rethink of the traditional Christian understanding of Judaism.

This does not mean jettisoning Christianity's deepest convictions in order to make it conform to Judaism.

Rather, Richard Harries develops the work of recent Jewish scholarship to discern resonances between central Christian and Jewish beliefs. This thought-provoking book offers fresh approaches to contentious and sensitive issues.

A key chapter on the nature of forgiveness is sympathetic to the Jewish charge that Christians talk much too easily about forgiveness.

Another chapter on suffering in Judaism and Christianity rejects the usual stereotypes and argues for important common ground, for example in the idea that God suffers in the suffering of his people.

There are also chapters on the state of Israel and the place of Jerusalemin Christian and Jewish thought. Richard Harries argues that the basic covenant is not with either Judaism or Christianity but with humanity.

These, like other religions, are different, distinctive voices in response to God's primal affirmation of human life, which for Christians is achieved and given in the life, death, and resurrection of Jesus Christ. In the light of this the author maintains - controversially - that Christians should not be trying to convert Jews to Christianity. Rather Jews and Christians should stand together and build on the great amount they have in common to work together for a better world.