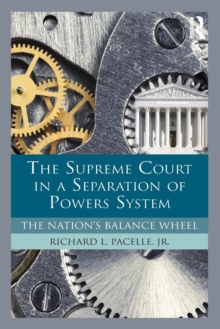 The Supreme Court in a Separation of Powers System : The Nation's Balance Wheel Paperback / softback

The U.S. Supreme Court is not a unitary actor and it does not function in a vacuum.

It is part of an integrated political system in which its decisions and doctrine must be viewed in a broader context.

In either instance, the Supreme Court's work is influenced by and in turn influences all three branches of the federal government as well as the interests and opinions of the American people. Pacelle analyzes the Court's interaction in the separation of powers system, detailing its relationship to the presidency, Congress, the bureaucracy, public opinion, interest groups, and the vast system of lower courts.

The niche the Court occupies and the role it plays in American government reflect aspects of both the legal and political models.

The Court has legal duties and obligations as well as some freedom to exercise its collective political will.

Too often those studying the Court have examined it in isolation, but this book urges scholars and students alike to think more broadly and situate the highest court as the "balance wheel" in the American system.