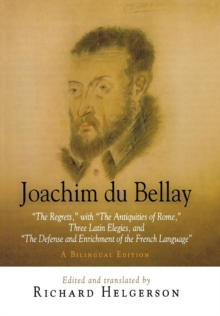 Joachim du Bellay : "The Regrets," with "The Antiquities of Rome," Three Latin Elegies, and "The Defense and Enrichment of the French Language." A Bilingual Edition Hardback

To the Reader:This little book, reader, that we give you now has at once the taste of gall and honey mixed with salt.

If it pleases your palate, come as a guest. This feast has been prepared for you. If not, please go away. I did not mean to invite you to the feast. Joachim du Bellay (1522-60) was one of the most important poets of the Renaissance and remains a cornerstone of the French literary tradition.

In this monumental bilingual edition Richard Helgerson collects The Regrets and The Antiquities of Rome, two sonnet sequences du Bellay wrote during the more than four years he spent in Rome and that he published immediately on his return to France in 1558, along with three Latin elegies he also wrote in Rome and The Defense and Enrichment of the French Language, his earlier manifesto for the new poetry he and his friend Pierre de Ronsard were then about to launch.

The Regrets is a vibrant, often moving, and by turns nostalgic and satiric account of du Bellay's stay at the papal court.

The Antiquities is also concerned with Rome, but in a very different way: not as a quotidian record of the poet's experience of the modern city but as a profound meditation on the ruin of an ancient empire. In imitation of Petrarch, sonnet sequences were a prime marker of the new poetry all over Europe.

But there are no other sequences like du Bellay's, none that leave love aside and express such a varied range of emotions and ideas. And du Bellay's Defense is in its own way no less remarkable and no less preoccupied with the classical heritage and its Rome: a bold call for a new French poetry that would rival and even surpass that of antiquity.