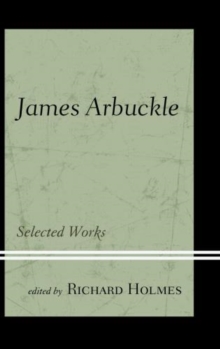 James Arbuckle (c.1700-1742), poet and essayist, was born in Belfast to a Presbyterian merchant family of Scottish origin and educated at Glasgow University (1717-1723).

In Glasgow, his poetry, influenced by Pope and the Latin classics, won praise from leading members of Scotland's literary and political establishment, including Allan Ramsay.

In 1723 he moved to Dublin, producing under the name "Hibernicus" Ireland's first literary journal, in collaboration with a group of young Whig intellectuals forming the "Molesworth circle".

He aimed at first to avoid politics, but in the highly politicized Dublin of Dean Swift that proved impossible.

He was satirized by members of Swift's circle and responded with the ironic Panegyric on the Rev Dean Swift.

His later work, especially The Tribune, developed a radical and anticlerical critique of contemporary Ireland, in which Swift was represented more as Church Tory than Irish patriot. Arbuckle was well-known in his day, but his work has not been published since the end of the eighteenth century.

He has often been discussed in modern scholarly work across a range of disciplines: on Swift and Pope; Scottish poetry and especially Allan Ramsay; Francis Hutcheson and the early Scottish Enlightenment; the background to the United Irishmen of 1798; the history of Irish presbyterians.

Arbuckle himself has not been the focus of detailed scholarly inquiry until now.

This edition presents an annotated selection of Arbuckle's work in poetry and prose.

It begins with a substantial introduction dealing with his biography and political and literary context.

It is then divided into three parts. The first, on his Scottish period, includes the annotated texts of his two principal poems, Snuff and Glotta.

The second presents a selection of the "Hibernicus" essays, grouped by four themes: literary (which will include a selection of his Horace translations); philosophical (responding principally to Francis Hutcheson); political (placing him in the contemporary varieties of Whiggism, and especially the dispute between Walpole and "Opposition" Whigs); religious (the focus here is on his writing on toleration).

The final section deals with his response to Swift's Irish writing, as demonstrated in selected essays from The Tribune and in A Panegyric.