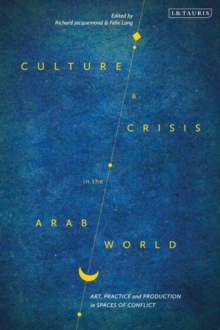 Culture and Crisis in the Arab World : Art, Practice and Production in Spaces of Conflict Hardback

Since 2011, the art of the Arab uprisings has been the subject of much scholarly and popular attention.

Yet the role of artists, writers and filmmakers themselves as social actors working under extraordinary conditions has been relatively neglected.

Drawing on critical readings of Bourdieu's Field Theory, this book explores the production of culture in Arab social spaces in `crisis'.

In ten case studies, contributors examine a wide range of countries and conflicts, from Algeria to the Arab countries of the Gulf.

They discuss among other things the impact of Western public diplomacy organisations on the arts scene in post-revolutionary Cairo and the consequences of dwindling state support for literary production in Yemen.

Providing a valuable source of empirical data for researchers, the book breaks new ground in adapting Bourdieu's theory to the particularities of cultural production in the Middle East and North Africa.