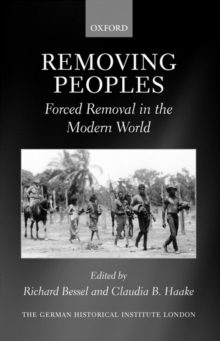 One of the terrible and tragic themes of modern history is the forced removal of millions of human beings.

Scarcely a corner of the world has been spared the violence of the forced removal of people from their homes for political, economic, 'racial', religious, or cultural reasons.

The causes, course, and consequences of the removal of peoples from their homes form a central theme in the history of the modern world.

While removing people from their homes by force didnot begin suddenly in the nineteenth century, the combination of the development of a global (capitalist) economy, of modern race-thinking, of world wars, of the triumph of popular and national sovereignty, and of new technological means of physically uprooting and transporting peoples has giventhis phenomenon a quantitatively and qualitatively new character. Removal has been a global phenomenon, and therefore this volume treats it within the frame of world history and international comparison.

Examples discussed range from the United States in the 1830s to the expulsion of pied noir settlers from Algeria in the 1960s.

A number of factors reshaped the older practices of forced migration and helped to make the removals discussed in this volume distinctly 'modern'.

These include the use of modern apparatuses of administration, communication, andcoercion, as well as warfare based on modern technology and organization.

When it became possible to remove human beings on a massive scale, people may have started to consider doing just that-and especially so in crises connected to war, colonization, or decolonization, as the studies assembled in thisvolume demonstrate.