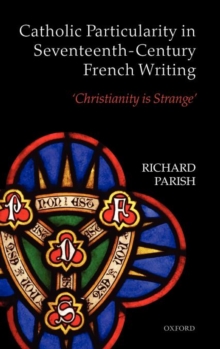 by Richard (Professor of French in the University of Oxford, and Fellow of St Catherine's Colle Parish

le christianisme est etrange' - Pascal, PenseesPascal's assertion that 'Christianity is strange', provides the theme for Richard Parish's exploration of Catholic particularity, as it was expressed in the writing of the French seventeenth century. This was a period of quite exceptional fertility in a range of genres: apologetics, sermons, devotional manuals, catechisms, martyr tragedies, lyric poetry, polemic and spiritual autobiography. Parish examines a broad cross-section of this corpus with reference to the topics of apologetics,physicality, language, discernment, polemics and salvation; and draws evidence both from canonical figures (Pascal, Bossuet, Fenelon, St Francois de Sales, Madame Guyon) and from less easily-available texts. Parish aims to consider all those distinctive features that the heritage of the Catholic Reformation brought to the surface in France, and to do so in support of the numerous ways in which Christian doctrine could be understood as being strange: it is by turns contrary to expectations, paradoxical, divisive, carnal and inexpressible. These features are exploited imaginatively in the more conventional literary forms, didactically in pulpit oratory and empirically in the accounts of personalspiritual experience. In addition they are manifested polemically in debates surrounding penance, authority, inspiration and eschatology, and often push orthodoxy to its limits and beyond in the course of their articulation.

This volume provides an unsettling account of a belief system to which early-modern France often unquestioningly subscribed, and shows how the element of cultural assimilation of Catholic Christianity into much of Western Europe only tenuously contains a subversive and counter-intuitive creed.

The degree to which that remains the case will be for the reader to decide.