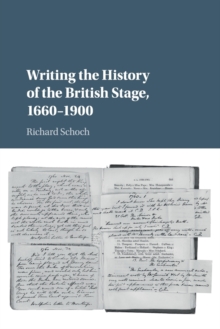 This is the first book on British theatre historiography.

It traces the practice of theatre history from its origins in the Restoration to its emergence as an academic discipline in the early twentieth century.

In this compelling revisionist study, Richard Schoch reclaims the deep history of British theatre history, valorizing the usually overlooked scholarship undertaken by antiquarians, booksellers, bibliographers, journalists and theatrical insiders, none of whom considered themselves to be professional historians.

Drawing together deep archival research, close readings of historical texts from the seventeenth, eighteenth and nineteenth centuries, and an awareness of contemporary debates about disciplinary practice, Schoch overturns received interpretations of British theatre historiography and shows that the practice - and the diverse practitioners - of theatre history were far more complicated and far more sophisticated than we had realised.

His book is a landmark contribution to how theatre historians today can understand their own history.