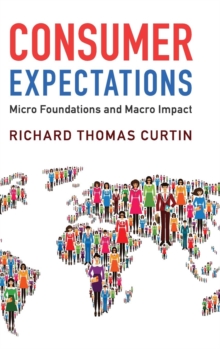 Richard Curtin has directed the University of Michigan's consumer sentiment surveys for more than four decades.

His analyses of recent trends in consumer expectations are regularly covered in the worldwide press.

In this book, Curtin presents a new theory of expectations.

He argues that expectations are formed by an automatic process that utilizes conscious and nonconscious processes, passion and reason, information from public and private sources, and social networks.

Consumers ultimately reach a decision that serves both the micro decision needs of individuals and reflects the common influence of the macro environment.

Drawing on empirical observations, Curtin not only demonstrates the importance of consumer sentiment, but also how it can foreshadow the cyclical turning points in the economy.