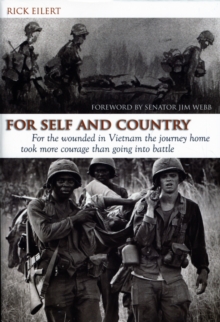 For Self and Country : For the Wounded in Vietnam the Journey Home Took More Courage Than Going into Battle Paperback / softback

Vietnam was often called a "teenager's war." The average age was 19.2 so, in the main, the War was fought by 17, 18, 19 and 20 year olds barely out of high school and often without the income, intelligence, inclination, or focus to attend college.

For everyone, the draft loomed large in their futures, you could choose your branch of service or let the draft decide for you. Fresh from sock hops and college freshman mixers, young men found themselves in a fight for their lives, from the Delta to the DMZ, on animal trails, numbered hills and in remote jungle outposts.

Teenagers witnessed the unspeakable carnage of war while trying to understand the collision of emotions and insult to the senses that is combat.

Thousands died there and many thousands more were wounded and maimed.

So the hell of combat was replaced by the painful recovery in a military hospital.

For Eilert and thousands of others it was Great Lakes Naval Hospital at Great Lakes, Illinois. For Self and Country follows Eilert's many months of recovery along with the stories of the brave young men who surrounded him and sustained with friendship and humour.

This is a story of family, young love, and the magnificent care administered by the Navy doctors, nurses and revered Corpsmen.

Great Lakes was a place of great pain but also recovery, not just from the physical damage sustained but also the unseen emotional injuries soldiers endured but rarely talked about.

Eilert recounts how most soldiers had no expectation of surviving Vietnam but found adapting back to civilian life an even harder challenge. About the AuthorRick Eilert, born on 4 June 1947, enlisted in USMC in March 1967. 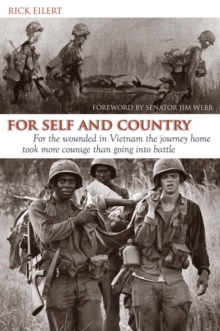 For Self and Country