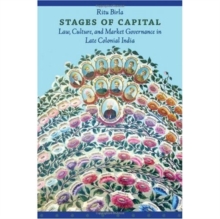 In Stages of Capital, Ritu Birla brings research on nonwestern capitalisms into conversation with postcolonial studies to illuminate the historical roots of India's market society.

Between 1870 and 1930, the British regime in India implemented a barrage of commercial and contract laws directed at the "free" circulation of capital, including measures regulating companies, income tax, charitable gifting, and pension funds, and procedures distinguishing gambling from speculation and futures trading.

Birla argues that this understudied legal infrastructure institutionalized a new object of sovereign management, the market, and along with it, a colonial concept of the public.

In jurisprudence, case law, and statutes, colonial market governance enforced an abstract vision of modern society as a public of exchanging, contracting actors free from the anachronistic constraints of indigenous culture.Birla reveals how the categories of public and private infiltrated colonial commercial law, establishing distinct worlds for economic and cultural practice.

This bifurcation was especially apparent in legal dilemmas concerning indigenous or "vernacular" capitalists, crucial engines of credit and production that operated through networks of extended kinship.

Focusing on the story of the Marwaris, a powerful business group renowned as a key sector of India's capitalist class, Birla demonstrates how colonial law governed vernacular capitalists as rarefied cultural actors, so rendering them illegitimate as economic agents.

Birla's innovative attention to the negotiations between vernacular and colonial systems of valuation illustrates how kinship-based commercial groups asserted their legitimacy by challenging and inhabiting the public/private mapping.

Highlighting the cultural politics of market governance, Stages of Capital is an unprecedented history of colonial commercial law, its legal fictions, and the formation of the modern economic subject in India. 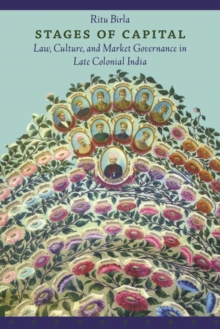