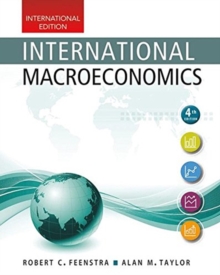 Developed in the classroom by two of the most prominent researchers in the field, Feenstra and Taylor's International Macroeconomics uses engaging applications to provide a modern view of the global economy for a modern audience.

Most international economics textbooks emphasize theory and the economies of advanced countries.

Feenstra and Taylor combine theoretical coverage with empirical evidence throughout, while reflecting the realities of the global economy by covering emerging markets and developing countries (India, China, Southeast Asia).

The new edition has been thoroughly updated to include new data and Applications, as well as many new Headlines to reflect the rapid changes in international economics during the last three years.

The 4th Edition includes the latest on opening relations with Cuba, immigration and Europe's refugee crisis, the effect of NAFTA on wages and employment, job polarization, quicksourcing, China's problems, and the debate in Britain about leaving the European Union.

A modern textbook requires a modern and integrated homework system.

LaunchPad offers our acclaimed content organized for easy assignability by instructors and enhanced learning for students.