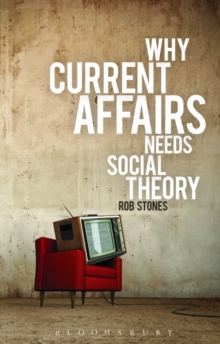 Television news is frequently disparaged by thoughtful commentators for its preoccupation with drama and spectacle at the expense of serious, in-depth, engagement with the critical issues it covers.

Whilst insisting these charges possess more than a small dose of truth, Rob Stones argues for more emphasis to be placed on strengthening the capacities of audiences.

Drawing from major traditions in social thought, and on academic media analysis, Stones provides the conceptual tools for audiences to bring greater sophistication to their interpretations, developing their capacity to think across items and genres. A detailed account of an episode of the Danish political drama, Borgen, reveals the extent to which its viewers already deploy similar concepts and skills in order to follow its storylines.

Stones shows how audiences can refine these skills further and demonstrates their value with respect to a wide range of current affairs texts, including: Israeli settlers on the West Bank; the Rwandan genocide; the Egyptian 'revolution'; the Obama administration's immigration reform bill; the bases of Germany's economic success; the conflict between 'red shirts' and 'yellow shirts' in Thailand; China's diplomatic relations with Burma; and scandals of mistreatment within the UK and Swedish healthcare systems. The book shows that everyone's understanding of current affairs can be significantly enhanced by social theory.

It will be relevant to students of sociology, politics, media studies and journalism at all levels.