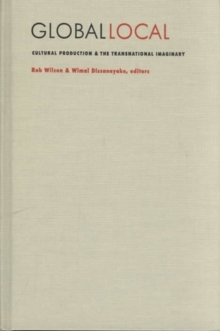 This groundbreaking collection focuses on what may be, for cultural studies, the most intriguing aspect of contemporary globalization-the ways in which the postnational restructuring of the world in an era of transnational capitalism has altered how we must think about cultural production.

Mapping a "new world space" that is simultaneously more globalized and localized than before, these essays examine the dynamic between the movement of capital, images, and technologies without regard to national borders and the tendency toward fragmentation of the world into increasingly contentious enclaves of difference, ethnicity, and resistance.

Ranging across issues involving film, literature, and theory, as well as history, politics, economics, sociology, and anthropology, these deeply interdisciplinary essays explore the interwoven forces of globalism and localism in a variety of cultural settings, with a particular emphasis on the Asia-Pacific region.

Powerful readings of the new image culture, transnational film genre, and the politics of spectacle are offered as is a critique of globalization as the latest guise of colonization.

Articles that unravel the complex links between the global and local in terms of the unfolding narrative of capital are joined by work that illuminates phenomena as diverse as "yellow cab" interracial sex in Japan, machinic desire in Robocop movies, and the Pacific Rim city.

An interview with Fredric Jameson by Paik Nak-Chung on globalization and Pacific Rim responses is also featured, as is a critical afterword by Paul Bove. Positioned at the crossroads of an altered global terrain, this volume, the first of its kind, analyzes the evolving transnational imaginary-the full scope of contemporary cultural production by which national identities of political allegiance and economic regulation are being undone, and in which imagined communities are being reshaped at both the global and local levels of everyday existence.