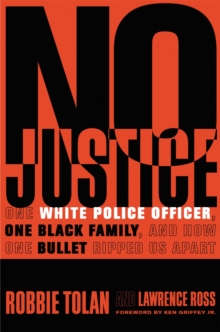 No Justice : One White Police Officer, One Black Family, and How One Bullet Ripped Us Apart Hardback

NO JUSTICE tells the story of a young black man, Robbie Tolan, who was gunned down on his parents' front lawn simply because a white officer failed to follow procedure. And it almost cost him his life. ROBBIE TOLAN, son of 14-year Major League Veteran Bobby Tolan, was a baseball standout at Bellaire High School in Houston, TX.

Signing with the Washington Nationals, with dreams of following in his father's footsteps, Robbie's life was destroyed because white Bellaire police officers falsely suspected him of driving a stolen car.

Innocent, and instead of being given a chance to defend himself, Robbie was shot inches from his heart in front of his pleading mother and father.

Despite the unlikely chances of survival, and grim expectations by doctors, Robbie beat all the odds.

He survived the shooting, but his dreams of a major league career did not.

The bullet remains in his back as a reminder of the racial profiling that nearly cost him his life.

That night transformed a tragedy into a call of justice; not only for Robbie but for the other black men and women being targeted by white police officers who have not had the same outcome.

They have been killed over simple excuses, whether jaywalking by Michael Brown, or making an illegal lane change with Sandra Bland.

Robbie Tolan's story emphasizes that that it doesn't end with the police encounter.

Robbie's hope with this book is to help keep the dialogue alive to find a way to stop police from reaching for their guns when they're not 100 percent certain of the criminal, the crime, or the threat.

NO JUSTICE is a poignant, gripping book that sits squarely in the crosshairs of race, police violence, racial profiling, and the ongoing discussion about why African Americans are disproportionately affected by violent police interactions.

Finally, a black victim of police violence has lived to speak for those who were killed. And Robbie has something important to say. His case was a precedent setting. It was the first Supreme Court ruling on a race since Brown vs.

Board of Education, and thousands of cases have now been heard because of this ruling.

The bullet that did not kill him will create justice for others.