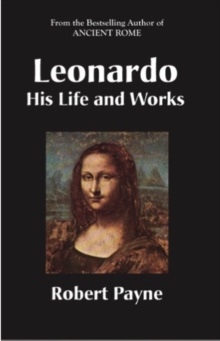 Based on entirely fresh primary research. Leonardo presents important new information and perspectives on one of the most interesting men and greatest geniuses of all time.

The following are only a few of the new and controversial findings offered by Payne in this highly readable book.

The portrait of a bearded man universally accepted as a self-portrait is actually a drawing of Leonardo's father.

The subject of the Mona Lisa was not the wife of a merchant but the Duchess of Milan -- among the illustrations in the book are two earlier, seldom-seen Mona Lisas.

Leonardo was not the son of a peasant woman, as it is generally thought he was, but of a high-born woman.

Payne paints an extraordinarily convincing picture of Leonardo not only as a giant of his age, but also as a man, human, real, simple and natural.

Besides dispelling many myths about him, the author places his subject realistically in his own time -- the summit of the Italian Renaissance with its wars and sudden upheavals, its unsurpassed artists and architects, its ambitious and often warring princes.

This is a meticulously accurate book which reads like a swiftly paced novel.

Robert Payne, author of some of the most widely read biographies of our day, now brings us a new and fascinating portrayal of Leonardo da Vinci.

This is the third volume of our recently released Robert Payne Library series.