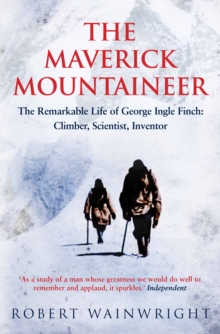 WINNER OF THE TIMES BIOGRAPHY OF THE YEAR PRIZE AT THE CROSS BRITISH SPORTS BOOK AWARDS 2017In the spring of 1901 a teenager stood on top of a hill, gazed out in wonderment at the Australian landscape and decided he wanted to be a mountaineer.

Two decades later, the same man stood in a blizzard beneath the summit of Mount Everest, within sight of his goal to be the first to stand on the roof of the world.

George Finch was at the highest point ever reached by a human being and only his decision to save the life of his stricken companion stopped him from reaching the summit. George Finch was a rebel of the first order, a man who dared to challenge the British establishment who disliked his independence, background, long hair and lack of an Oxbridge education.

Despite this, he not only became one of the world's greatest alpinists, earning the grudging respect of his rival George Mallory, but pioneered the use of the artificial oxygen that enabled Everest to finally be conquered thirty years after his own attempt.

A renowned scientist, a World War I hero and a Fellow of the Royal Society, involved in the development of some of the twentieth century's most important inventions, his skills helped save London from burning to the ground during the Blitz.

Finch's public accomplishments, however, were shadowed by his complicated private life and his fraught relationship with his son, the actor Peter Finch. Acclaimed biographer Robert Wainwright restores George Finch to his rightful place in history with this remarkable tribute to one of the twentieth century's most eccentric anti-heroes. 'One of the two best Alpinists of his time - Mallory was the other.' The Times