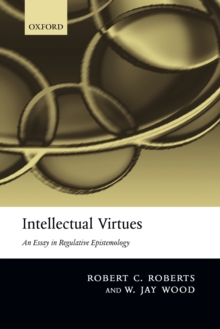 Out of the ferment of recent debates about the intellectual virtues, Roberts and Wood have developed an approach they call 'regulative epistemology'.

This is partly a return to classical and medieval traditions, partly in the spirit of Locke's and Descartes's concern for intellectual formation, partly an exploration of connections between epistemology and ethics, and partly an approach that has never been tried before.

Standing on the shoulders of recent epistemologists - including William Alston, Alvin Plantinga, Ernest Sosa, and Linda Zagzebski - Roberts and Wood pursue epistemological questions by looking closely and deeply at particular traits of intellectual character such as love of knowledge, intellectual autonomy, intellectual generosity, and intellectual humility.

Central to their vision is an account of intellectual goods that includes not just knowledge as properly grounded belief, butunderstanding and personal acquaintance, acquired and shared through the many social practices of actual intellectual life.

This approach to intellectual virtue infuses the discipline of epistemology with new life, and makes it interesting to people outside the circle of professional epistemologists.

It is epistemology for the whole intellectual community, as Roberts and Wood carefully sketch the ways in which virtues that would have been categorized earlier as moral make for agents who can better acquire, refine, and communicate important kinds of knowledge.