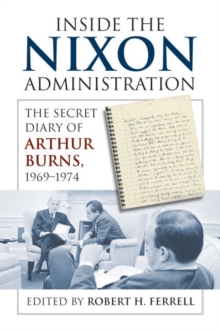 Inside the Nixon Administration : The Secret Diary of Arthur Burns, 1969-1974 Hardback

As chairman of the Federal Reserve Board in the seventies, Arthur Burns had a unique view of the Nixon administration.

Burns first joined the Nixon administration as an advisor in 1969 and was privy to the dynamics of the president's coterie over the course of six tumultuous years.

Now the recently released secret diary of this top-level economist offers a surprisingly candid inside look at Richard Nixon's fall. The diary tracks Burns's growing awareness of Nixon's behind-the-scenes maneuverings and worrisome behavior (such as "insane shouting") and reveals how such things undermined his respect and enthusiasm for the president.

R. Haldeman and John Ehrlichman-the only people he thought Nixon felt relaxed around. The Burns diary also offers rare and telling glimpses into the era's economy-particularly an account of how Nixon exerted political pressure to shape monetary policies that helped to fuel the stagflation of the 1970s.

The administration sought to close the so-called gold window, an approximate valuation of dollars with gold bullion, by floating the dollar, and the consensus over many years has been that Nixon himself arranged this-speculation now confirmed by Burns's diary.

It also underscores the growing pressure Burns felt to serve the needs of Nixon's reelection bid rather than the economic welfare of the nation. Sequestered for decades and unavailable until 2008, this document reveals an honest and relatively apolitical man surrounded by partisans in top administrative positions who were dishonest, inept-or both. "The President has many shortcomings," wrote Burns. "He has few convictions, but now and then he gets into a euphoric mood where he wants to persuade himself that he's a statesman.

But his sycophantic advisers cannot even recognize that."Deftly annotated by distinguished historian Robert Ferrell, who provides effective historical context and perspective, the Burns diary is a potent-and poignant-testament to the Machiavellian and often Byzantine world of American presidential politics.