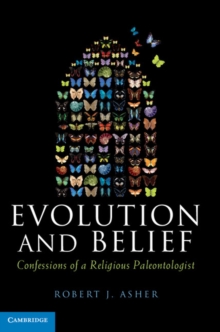 Evolution and Belief : Confessions of a Religious Paleontologist Hardback

Can a scientist believe in God? Does the ongoing debate between some evolutionists and evangelicals show that the two sides are irreconcilable?

As a paleontologist and a religious believer, Robert Asher constantly confronts the perceived conflict between his occupation and his faith.

In the course of his scientific work, he has found that no other theory comes close to Darwin's as an explanation for our world's incredible biodiversity.

In outlining the scope of Darwin's idea, Asher shows how evolution describes the cause of biodiversity, rather than the agency behind it.

He draws a line between superstition and religion, recognizing that atheism is not the inevitable conclusion of evolutionary theory.

By liberating evolution from its misappropriated religious implications, Asher promotes a balanced awareness that contributes to our understanding of biology and Earth history.