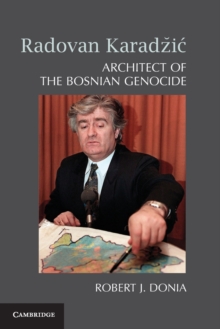 Radovan Karadzic, leader of the Bosnian Serb nationalists during the Bosnian War (1992-5), stands accused of genocide and other crimes of war before the International Criminal Tribunal for the former Yugoslavia in The Hague.

This book traces the origins of the extreme violence of the war to the utopian national aspirations of the Serb Democratic Party and Karadzic's personal transformation from an unremarkable family man to the powerful leader of the Bosnian Serb nationalists.

Based on previously unused documents from the tribunal's archives and many hours of Karadzic's cross-examination at his trial, the author shows why and how the Bosnian Serb leader planned and directed the worst atrocities in Europe since the Second World War.

This book provocatively argues that postcommunist democracy was a primary enabler of mass atrocities because it provided the means to mobilize large numbers of Bosnian Serbs for the campaign to eliminate non-Serbs from conquered land.