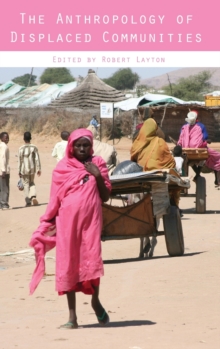 The Anthropology of Displaced Communities Hardback

This collection highlights the work of the Royal Anthropological Institute's Urgent Anthropology Fellowships fund, which supports research into communities whose culture and social life are under immediate threat.

Created by George Appell in response to the distress he experienced working with a traumatized community of swidden cultivators in Borneo, who were struggling to survive after relocation in what Appell describes as a 'cultural concentration camp', the fund was established to identify ways of supporting and strengthening such communities through ethnographic work. Since 1995, Urgent Anthropology Fellows have worked with many displaced communities, whether found in refugee camps, resettled in kindred communities across national borders or in environments hostile to their traditional way of life; or whether suffering from the aftermath of civil war or the intrusion of foreigners in search of minerals.

Despite the diversity of circumstances in these case studies, this book shows some of the common strategies that emerge in helping displaced communities regain some control over their own destinies.

These include membership of social networks, access to natural resources, land ownership and self sufficiency, autonomy in local judicial procedures and economic activities as well as the celebration of traditional rituals, all of which lessen the potential powerlessness of displaced communities.

Any anthropologist or NGO worker, and indeed anyone who works with, or cares about, vulnerable communities and the rights of indigenous peoples, will gain much from the accumulation of experience and insights offered herein.