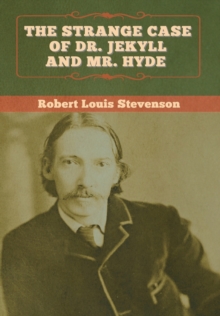 The Strange Case of Dr. Jekyll and Mr. Hyde Hardback

Robert Louis Stevenson (13 November 1850 – 3 December 1894) was a Scottish novelist and travel writer, most noted for Treasure Island, Kidnapped, Strange Case of Dr Jekyll and Mr Hyde, and A Child's Garden of Verses.

Born and educated in Edinburgh, Stevenson suffered from serious bronchial trouble for much of his life, but continued to write prolifically and travel widely in defiance of his poor health. As a young man, he mixed in London literary circles, receiving encouragement from Andrew Lang, Edmund Gosse, Leslie Stephen and W. E. Henley, the last of whom may have provided the model for Long John Silver in Treasure Island. Stevenson spent several years in search of a location suited to his health, before finally settling in Samoa, where he died.

Stevenson’s literary reputation has fluctuated. The reaction against him set in soon after his death: he was considered a mannered and imitative essayist or only a writer of children’s books. But eventually the pendulum began to swing the other way, and by the 1950s his reputation was established among the more discerning as a writer of originality and power whose essays at their best are cogent and perceptive renderings of aspects of the human condition; whose novels are either brilliant adventure stories with subtle moral overtones or original and impressive presentations of human action in terms of history and topography as well as psychology; whose short stories produce some new and effective permutations in the relation between romance and irony or manage to combine horror and suspense with moral diagnosis; whose poems, though not showing the highest poetic genius, are often skillful, occasionally (in his use of Scots, for example) interesting and original, and sometimes (in A Child’s Garden) valuable for their exhibition of a special kind of sensibility. (wikipedia.org)