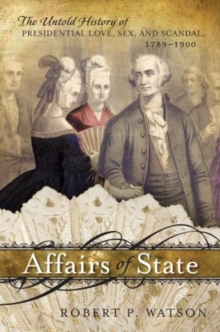 by Robert P., Lynn University; author of Affairs of State, The Presidents' Wives, and America's Watson

But such stories are not new. Indeed, there is a long history of misbehavior in politics, including in the nation's highest office.

Bill Clinton, it can safely be said, was not the first president to misbehave, nor was he the worst. In fact, there is a long history of presidential peccadilloes.

Many presidents have been influenced and had their careers affected by the hand of a woman, sometimes that of a wife or mother, but at other times that of a mistress.

But these stories are rarely told. Instead, history has tended to glorify our leaders. Such a scrubbed version of the lives of presidents, however, omits their marital woes, love lives, and sexual peccadilloes.

As Robert P. Watson reveals, it is precisely these intimate and all-too-human moments that provide some of the most valuable insights into our leaders. Affairs of State is not just about sex and scandal-the "who did it" of history-although such incidents are described in detail.

It is a book about love, marriage, and affairs in the White House, offering an intimate character study of the First Couples who made history. To see the author discuss his book on Inside South Florida, please click here.

To see him discuss the book on C-SPAN, please click here.