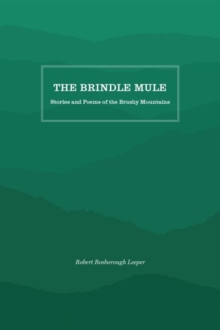 The Brindle Mule : Stories and Poems of the Brushy Mountains Paperback / softback

Written in Robert Leeper's student days at the University of North Carolina at Chapel Hill and later at Columbia University, The Brindle Mule is a book of stories and poems emphasizing a childhood spent in the mountain country of Western North Carolina.

Leeper grew up near Alexander County where his father was a physician and highly involved in the local community.

Inspired by the cultural heritage of the region, Leeper decided to write down the stories and poems he heard gathered around the fireside, at picnics, in church, and at friends and family's homes.

Published in 1983, this book is a testament to the local lore of the Western Mountain region of North Carolina.