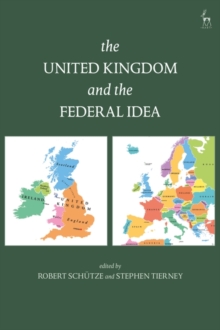 The United Kingdom and The Federal Idea Hardback

How should political power be divided within and among national peoples?

Is the nineteenth-century theory of the sovereign and unitary State still fit for purpose in the twenty-first century?

If not, can federalism provide a viable alternative model?

This collection looks at federalism from the perspective of constitutional law.

Taking the United Kingdom as a case study, Part One tracks the historical evolution of the 'Union' and explores the various expressions of federalism that emerged between the eighteenth and twentieth centuries.

Part Two then assesses the experience of sovereignty-sharing with other nations in the context of international cooperation.

Drawing on the expertise of the foremost commentators in their field, The United Kingdom and the Federal Idea provides a timely and reflective evaluation of how constitutional authority is being re-ordered within and beyond the United Kingdom.