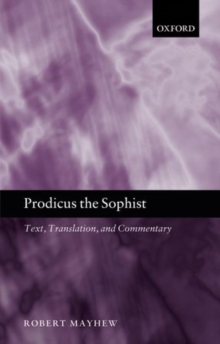 The past fifty years have witnessed the flourishing of scholarship in virtually every area of ancient Greek philosophy, but the sophists have for the most part been neglected.

This is certainly true of Prodicus of Ceos: of the four most well-known sophists-Protagoras, Gorgias, Prodicus, and Antiphon-he has received the least attention.

Robert Mayhew provides a reassessment of his life and thought, and especially his views on language, religion, and ethics.

Thisvolume consists of ninety texts with facing translations-far more than have appeared in any previous edition-and provides the first commentary on the extant evidence for Prodicus' life and thought.

The texts are drawn from the best available editions; the translations are new, and faithful to theoriginal.

Mayhew's commentary is designed to serve the needs of a wide range of readers: both scholars of ancient philosophy, and advanced students curious about this intriguing figure who appears in over a dozen Platonic dialogues.