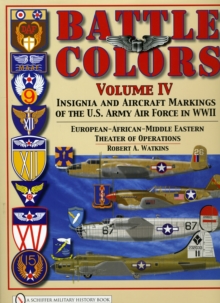 Volume IV of the Battle Colors series concludes the examination of USAAF combat insignia and aircraft tactical markings in the European Theater during World War II.

Covered within this work are the Ninth, Twelfth, and Fifteenth AAFs from the first to last combat operations by U.S. air power in the Mediterranean Theater of Operations.

These operations were extensive and covered territory extending from the sands of North Africa to the heartland of Germany, and from the shores of French Morocco to the oil fields of Romania.