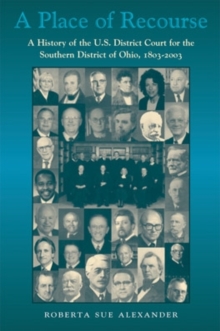 Place Of Recourse : History Of Us District Court For Hardback

The First History Of A Federal District Court in a midwestern state, A Place of Recourse explains a district court's function and how its mission has evolved.

The court has grown from an obscure institution adjudicating minor debt and land disputes to one that plays a central role in the political, economic, and social lives of southern Ohioans.

In tracing the court's development, Alexander explores the central issues confronting the district court judges during each historical era.

She describes how this court in a non-slave state responded to fugitive slave laws and how a court whose jurisdiction included a major coal-mining region responded to striking workers and the unionization movement.

Accordingly, Alexander provides historical insight on current and past judges.

She details behind-the-scenes maneuvers in judicial appointments and also the creativity some judges displayed on the bench - such as Judge Leavitt, who adopted admiralty law to deal with the problems of river traffic.

A Place of Recourse demonstrates that, at least in the Southern District of Ohio, the federal district court has played the role its creators hoped it would - upholding federal law even when the citizens of the region actively opposed such enforcement.