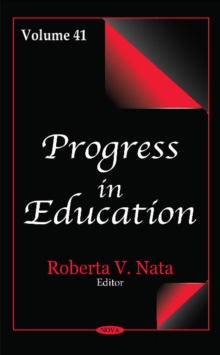 The ongoing Progress in Education series presents substantial results from around the globe in selected areas of educational research.

Schools are institutions that sail in the tempest of educational issues, reforms, strategies, data and tools, as well as reflect changes in society.

Embedded in all of these are technology, diversity, and innovation - their inevitability has been demonstrated in our schools and communities.

The first chapter of this volume reviews studies on the associations between childrens temperament dimensions and academic achievement.

Chapter Two analyzes the psychometric properties as well as the validity of a newly developed scale for measuring preadolescent students' self-concept of L2 grammatical competencies.

Chapter Four presents a longitudinal study of a sample of prospective teachers which analysed the evolution from before to after their teaching practices of their personal metaphors about themselves as teachers and about their pupils' role, and the emotions associated with those metaphors.

Chapter Seven examines the effect of student and family background and student academic preparedness on success in college.

Chapter Eight determines the extent to which differences were present in college-ready rates in reading, mathematics, and in both subjects for Asian boys and Asian girls as a function of their economic status in Texas high schools for 2005-2006 through 2011-2012.