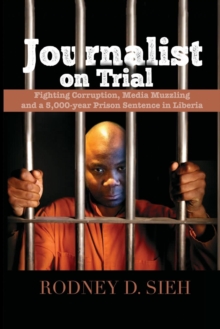 Journalist on Trial is the captivating story of Rodney D. Sieh, one of Africa's finest investigative journalists. This is not just Rodney’s story but the story of virtually every journalist today, an era that has become consumed by daily tweets of a sitting US President and a 24-hour news circle that has seen real news eclipsed by fake news. And where some leaders of the so-called “free world” are terrorizing journalists into submission.

As publisher of Liberia's leading newspaper, FrontPageAfrica, Sieh’s explosive reports have led to arrests, prosecutions and investigations of prominent Liberian government officials. Sentenced to 5,000 years in imprisonment for a trumped-up libel charge in 2013, Sieh’s arrest and jailing triggered an international outcry and highlighted the continuing existence of criminal libel statutes in Africa where politicians use the courts to intimidate and silence the media from exposing their corruption.

His sentence also brought pressure from journalists with The New York Times, BBC, Toronto Star, Globe & Mail and others in the global journalist rights community to win his release. Sieh’s work landed him among Reporters Without Borders' Information Heroes of 2014. Sieh fled the brutal civil war in his homeland in 1992 for exile in The Gambia. As a reporter there for both his uncle Kenneth Best’s Daily Observer newspaper and the British Broadcasting Corporation, his coverage about the deaths and disappearances that followed Yahya Jammeh’s coup d’état on July 22nd, 1994, forced him once again into exile to London, UK. He later took refuge in the United States.