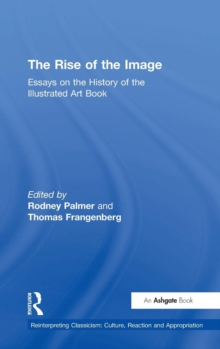 The Rise of the Image : Essays on the History of the Illustrated Art Book Hardback

Part of the Reinterpreting Classicism: Culture, Reaction and Appropriation series

The Rise of the Image reveals how illustrations have come to play a primary part in books on art and architecture.

Italian Renaissance art is the main focus for this anthology of essays which analyse key episodes in the history of illustration from the sixteenth to the twentieth century.

The concluding essays evaluate the roles of reproductive media, including photography, in Victorian and twentieth-century art books.

Throughout, images in books are considered as vehicles for ideas rather than as transparent, passive visual forms, dependent on their accompanying texts.

Thus The Rise of the Image enriches our understanding of the role of prints in books on art.