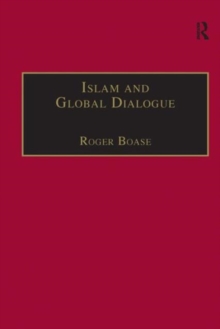 Islam and Global Dialogue : Religious Pluralism and the Pursuit of Peace Hardback

At a time when the world is becoming increasingly interdependent, multi-cultural and multi-religious, the concept of religious pluralism is under assault as a result of hatred, prejudice and misunderstanding from both religious exclusivists and dogmatic secularists. In this important and timely book, twenty internationally acclaimed scholars and leading religious thinkers respond to contemporary challenges in different ways.

Some discuss the idea of a dialogue of civilisations; others explore the interfaith principles and ethical resources of their own spiritual traditions.

All of them reject the notion that any single religion can claim a monopoly of wisdom; all are committed to the ideal of a just and peaceful society in which people of different religions and cultures can happily coexist.

More space is here given to Islam than to Judaism and Christianity because, as a result of negative stereotypes, it is the most misunderstood of the major world religions.