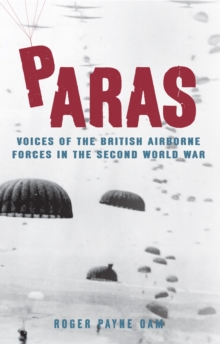 Paras : Voices of the British Airborne Forces in the Second World War Hardback

This book is full of untold short stories of men who created a legend, the legend of the British airborne forces during the Second World War. Impressed by the performance of the German paratroopers in Belgium and the Netherlands in 1940, and on Crete in 1941, Winston Churchill ordered the creation of a British Airborne force of no less than 5,000 parachutists.

Their task was to land behind enemy lines and take and hold or destroy key objectives while ground troops advanced toward them.

The result was the 1st and 6th Airborne divisions, and this is their story, as told by the men themselves. Covering everything from the initial training at Hardwick Hall and Ringway through their first operations in North Africa and Italy, to D-Day, Operation Market Garden and the crossing of the Rhine, this is a compelling account of the war fought by the paratroopers and their comrades in the glider units.