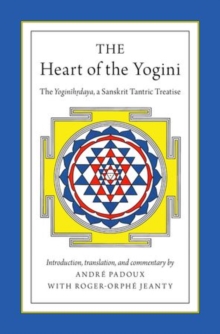 The Heart of the Yogini : The Yoginihrdaya, a Sanskrit Tantric Treatise Paperback / softback

Though many practitioners of yoga and meditation are familiar with the Sri Cakra yantra, few fully understand the depth of meaning in this representation of the cosmos.

Even fewer have been exposed to the practices of mantra and puja (worship) associated with it. Andre Padoux, with Roger Orphe-Jeanty, offers the first English translation of the Yoginihrdaya, a seminal Hindu tantric text dating back to the 10th or 11th century CE. The Yoginihrdaya discloses to initiates the secret of the Heart of the Yogini, or the supreme Reality: the divine plane where the Goddess (Tripurasundari, or Consciousness itself) manifests her power and glory.

As Padoux demonstrates, the Yoginihrdaya is not a philosophical treatise aimed at expounding particular metaphysical tenets.

It aims to show a way towards liberation, or, more precisely, to a tantric form of liberation in this life--jivanmukti, which grants both liberation from thefetters of the world and domination over it.