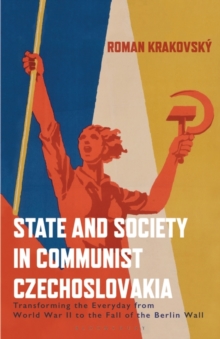 State and Society in Communist Czechoslovakia : Transforming the Everyday from WWII to the Fall of the Berlin Wall Paperback / softback

Across central and eastern Europe after World War II, the newly established communist regimes promised a drastic social revolution that would transform the world at great pace and pave the way to a socialist future.

Although many aspects of this utopian project are well known - such as fast-paced industrialisation, collectivisation and urbanisation - the regimes even sought to transform the ways in which their citizens interacted with each other and the world around them.

Using a unique analytical model based on an amalgam of anthropology, sociology, history and extensive archival research, award-winning scholar Roman Krakovsky here considers the Czechoslovakian attempt to 'reinvent the world' - 'time' and 'space' included - in this all-encompassing way.

Ranging from WWII to the fall of the Berlin Wall, his innovative analysis variously considers the impact of Stakhanovism, the impossible-to-achieve production targets intended to assert socialism's future potential; the attempt to replace Sunday's Christian attributes with socialist ones; and the profound changes brought about to the public and private spheres, including the culture of informing and the ways this was circumvented. Across a wide range of case studies Krakovsky demonstrates both the far-reaching extent of the communist vision and the inherent flaws and contradictions that gradually destabilised it.

This in-depth perspective is vital reading for all scholars of twentieth century history and politics.