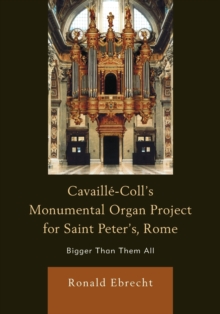 Aristide Cavaille-Coll (1811-1899) is often referred to as the greatest organ builder of all time.

The pipe-organ, being the most complicated musical instrument mechanically and tonally, as well as the most expensive, adds significantly to that world's greatest designation.

The talents required to be such a person range far from music-making to advanced physics, architecture, and engineering.

That, plus the obvious knack to raise vast sums of money.

Cavaille-Coll's Monumental Organ Project for Saint Peter's, Rome: Bigger Than Them All, by Ronald Ebrecht, is the story of the quest to build the largest-ever mechanical-action organ in the biggest church at the time.

Cavaille-Coll's model for that organ and the book he wrote outlining his proposal are the core of Ebrecht's discussion. Cavaille-Coll bestrode a century as well as an art-form.

His century complicated the project with the most intricate, intractable problems.

Saint-Peter's Square, now a part of the Vatican City State, was then part of the newly-united Italy, which had just deposed the pope as ruler of the center of Italy and taken the papal lands.

The east end of the basilica facing the square and the Tiber became a much disputed boundary.

It was a part of the Italian state so hotly contested that the Italian Republicans would not accept the concept of an organ hanged from the basilica wall, lest it shift.

Before, or since, has the music sphere ever provoked such a question that could bring nations to swords? 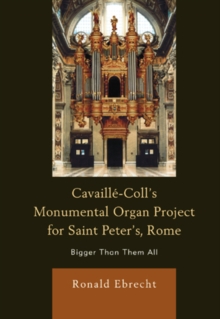