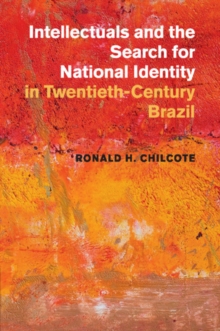 This book discusses twentieth-century Brazilian political thought, arguing that while Rio de Janeiro intellectuals envisaged the state and the national bourgeoisie as the means to overcome dependency on foreign ideas and culture, Sao Paulo intellectuals looked to civil society and the establishment of new academic institutions in the search for national identity.

Ronald H. Chilcote begins his study by outlining Brazilian intellectuals' attempt to transcend a sense of inferiority emanating from Brazilian colonialism and backwardness.

Next, he traces the struggle for national identity in Rio de Janeiro through an account of how intellectuals of varying political persuasions united in search of a political ideology of national development.

He then presents an analysis by Sao Paulo intellectuals on racial discrimination, social inequality, and class differentiation under early capitalism and industrialization.

The book concludes with a discussion on how Brazilian intellectuals challenged foreign thinking about development through the state and representative democratic institutions, in contrast to popular and participatory democratic practices.