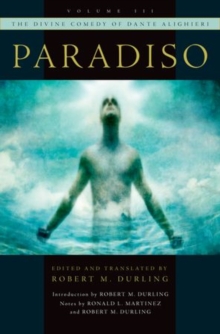 One of the greatest living Italian-to-English translators, Robert Durling's rendition of the third and final volume of Dante's masterful literary epic is now available in paperback.

As with the two preceding volumes, Durling's precise and powerful translation of Paradiso appears alongside the original Italian text recounting Dante's journey through heaven with the beautiful Beatrice.

The end of each canto contains thorough yet succinct notes by Durling and RonaldMartinez that acquaint the reader with Dante's medieval world and his reference points.

Thus the volume will appeal to the general reader as well as lovers and students of Italian literature, language, and history.

While English-language translations of the Commedia abound, the accuracy and lyricalverve of Durling's translations have earned him a place as one of the all time greats.